The City College of New York

From the cuneiforms (Edsitement; “CUNEIFORM Writing”) carved by wedge-shaped styluses to the first feathered quill and ink, writing has always been the best form of communication and recording. With a way to document historic events, people today are able to uncover hidden parts of history to solve mysteries of the past and learn about the cultures of ancient civilizations.  Today, the writing utensils that are most frequently used are pencils and pens, with pens being the more popular. One of the most well known pens is the Pilot G-2, a retractable gel pen with a rubber grip. The invention of the Pilot G-2 dates back into the early 1900s when Ryosuke Namiki founded the Pilot Pen Corporation in 1918 under the name of Namiki Manufacturing Company (Pilot Pen). The company is known for manufacturing and selling maki-e decorated pens and pencils (Britannica). It was not until 1964 when the company completely revolutionizes the fountain pen by creating a pen that allows the ink cartridge to retract into the barrel of the pen. This was a life-changing moment when pens no longer needed a cap, allowing for easy accessibility. Its rubber grip enables better handling, and the gel ink created smoother writing. With such great convenience and ergonomic grip, the Pilot G-2 is definitely an innovation for society. In just several years, the Pilot G-2 pens were put on the market, earning its title as the “#1 Selling Gel Pen” in America during 1997. With a rich and compelling history behind such a revolutionizing device, the pen is definitely a tool worth understanding. Thus, this paper will explore the design and mechanism of the Pilot G2 pen to comprehend its parts and functions.

The Pilot G2 Pen is composed of many parts: a pen nib (the metallic tip), a rubber grip, a pen barrel, a ink cartridge or chamber, a clicking or retractable mechanism, a clip, and a thin, coiled spring. 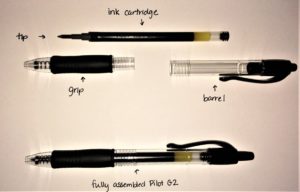 Figure 1. A labelled diagram of the Pilot G-2 pen showing the ink cartridge, the tip of the pen or nib, the rubber grip, the barrel, the spring, and the fully constructed pen. (This picture is taken from “Roller vs. Ballpoint: What’s the Difference?”)

Parts of the Pen: 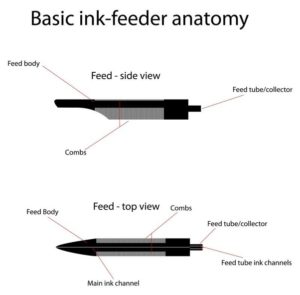 Figure 2. A diagram of the ink feed inside the pen nib. (This picture is taken from “Roller vs. Ballpoint: What’s the Difference?”)

Because the pen can be disassembled and the ink cartridge can be removed, the Pilot G-2 Pen is refillable by simply buying a new ink cartridge and replacing the old one. 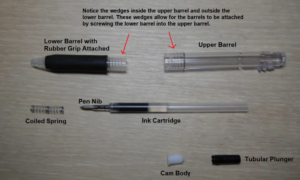 Figure 3. A diagram of the Pilot G-2 fully disassembled and its parts labelled. (This picture is taken from Instructables.com by Chikpeas Brother)

How the Pen Works:

From an outside perspective, using the pen is fairly simple. Simply press the plunger on the top of the pen to push the ink cartridge out of the barrel for writing. This process produces two clicks. To retract the ink cartridge, push the plunger again to retrieve the cartridge when the pen is not in use. These two steps make it easy for the Pilot G-2 to use, and convenient for writing because it is capless. Though the pen is easy to use, the mechanism behind the retractable pen is a little more complicated.

How the Retractable Mechanism Works:

The mechanism can be described in just a few steps (Limer). First, the round end of the plunger is pressed on the top of the pen. This forces the ink cartridge to exit the upper pen barrel and through the opening of the lower pen barrel. This means that the plunger has pushed the cam body past the stop members (Figure 5). At this point, the plunger slides down the angled teeth of the cam body, rotates the cam body, and strikes it to produce a click (Figure 6). At the same time, the spring from the lower barrel of the pen is being compressed, meaning that when the plunger is released, the spring will extend and push the cartridge up. This will therefore push the plunger past the angled tooth of the cam body (Figures 7a and 7b) and allow the cam body to rotate again. When this happens, the cam body strikes the stopper and creates the second click. Now, the cam body is locked in place because of its contact with the stop member, and the ink cartridge is extended for writing. 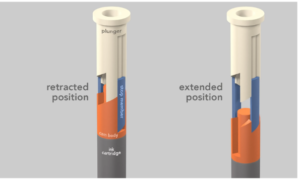 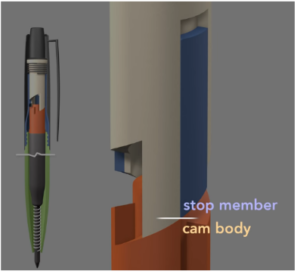 Figure 5. The cam body is pushed past the stop member in the pen. 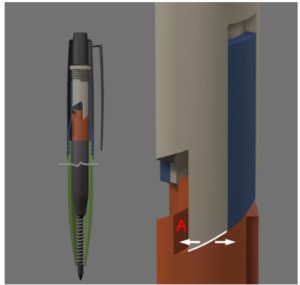 Figure 6. The cam body is being rotated because of the plunger slides down the angled teeth. The area marked A of the cam body hits the plunger on the first press. 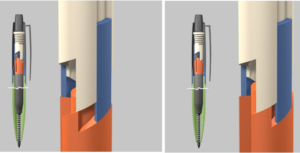 Figures 9a, 9b, and 9c. 9a is when the plunger is released from the cam body. 9b shows the cam body rotating one last time right before it strikes the stop member. 9c shows the ink cartridge fully retracted and the cam body sliding back into its original place.

Writing utensils have come a long way since the first recorded piece of writing was made. Retractable pens today are now ubiquitous, serving the purpose of easy writing and convenient accessibility. The Pilot G-2 in particular has been one of the most popular pens in society. Though it has a simple design and comes with great convenience, the Pilot G-2 retractable gel pen hides a clever engineering design inside it. The pen can retract at a push of a button with the right pieces for the retractable mechanism, allowing for a capless pen, a revolution for the writing world. In addition to its comfortable rubber grip and gel ink, the G-2 is undoubtedly a phenomenal pen that offers easy access, effortless writing, and smooth handwriting. Its cheap pricing from various stores makes the pen the perfect tool at home, the office, or at school. It definitely deserves the name “#1 Selling Gel Pen” of America.

This entry is licensed under a Creative Commons Attribution-NonCommercial-ShareAlike 4.0 International license.

Need help with the Commons? Visit our
help page Send us a message

Built with WordPress Protected by Akismet Powered by CUNY